Return to the Main Page

Click here to see the catalogue for the 2004 compact show

Click here to learn about fine compacts as works of art

The ornately engraved silver compacts (and often matching lipsticks and combs) with hand painted enamel panels showing pastoral scenes of lovers, shepherds and people cavorting in idealized countryside settings often taken from 18th and 19th century paintings bring big money on auction sites like Ebay. They are often marked "800" (80% pure silver, 20% alloy – "pure" silver is 925 - 92.5% pure silver, 7.5% alloy), sometimes "Made in Italy", "Firenze" "Made Italy" or just "Italy" and sometimes with names like Bellini, Fallaci, Galletti or Coppini. They are usually described by sellers as "antique", "Victorian" or even "19th century". 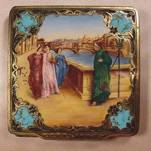 This fine compact is by an unknown maker and depicts a copy of "Dante and Beatrice" by Henry Holiday (British 1883), a well-known Pre-Raphaelite painter. This is one of the finest examples of miniature painting on compacts I have seen. The copy is nearly flawless and even the background is rendered in fine detail.

As a compact collector I became fascinated with this type. And, since I work part of the year as an archaeological photographer in Tuscany, I decided to spend a day or two in Florence to find out what I could about these lovely works of art. So armed with a few addresses from original tags and boxes associated with these compacts I set out to find the Bellini's, Fallaci's, Coppini's and Galletti's  - and I did!!

Several interviews with these families revealed some of the story of behind these compacts. The earliest date possible for compacts of this type seems to be 1939 when Alfredo Fallaci began his jewelry business in Florence with compacts as a sideline. Unfortunately, no sooner did he get going but World War II began. The market for luxury items died and precious metals were no longer available, so Alfredo closed his fledgling business and  opened a bar in Rome's Termini train station for the duration of the war. He and his family did not return to the jewelry business until about 1946. Then Alfredo, his wife, Ottavina and his son Pietro, who runs the jewelry business today, began making these compacts in 800 silver, gilded silver and gilded brass.

They were sold in the family's shop but they were also distributed to other businesses in tourist centers like Florence, Naples, Rome and Venice. Most of them, however, were exported to France and the United States, to department stores like Macy's, Gimbel's, Saks and Neiman Marcus where their popularity helped these Italian jewelers become some of the success stories in the post-war rebuilding of the devastated Italian economy. Their import could explain the large numbers of these found in American estates today, as well as those so often found in boxes with names and trademarks of the stores that sold them rather than those of the manufacturers.

This  example is signed "Fallaci" and depicts a finely rendered detailed scene of a countryside with a bridge. Note the lady washing clothes in the stream.

The patriarch  of the Bellini family, Ugo, began his jewelry business in 1946. At first he made and sold 800 compacts that were ornately engraved without enamel work, but by the 1950's he too was producing fine 800 enamel compacts. In 1969 the Bellini's stopped producing silver compacts and continued with those of gold plated brass. But even these ceased production a few years later. The jewelry business continues today with Ugo's son, Giovanni, and his family in charge. 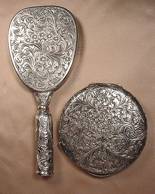 These engraved plain silver examples were the first type of 800 compact produced in post-war Italy. 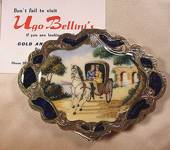 This is one of Ugo Bellini's designs. 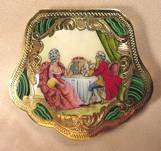 This is one of Bellini's later gold plated brass compacts.

This remarkable  design possibly depicting personifications of music and theatre is the last compact to survive in the Galletti workshop.

According to the Galletti family, another producer of these compacts, the great flood of 1966 that devastated Venice also caused flooding in the shops along the Arno River in Florence. A lot of inventory, including compacts, was either washed away or destroyed, making these lovely compacts even rarer today.

This compact depicting a scene of shepherds and shepherdesses from a painting called "The Nest" by Francois Boucher (1743)  is signed "Coppini". Note the matching lipstick is gold-plated while the compact is not.

Another name, Coppini, is found on compacts of this type. While there is a Coppini family in the jewelry business today in Florence, they are not from the family that produced these compacts.

According to Giovanni Bellini, several steps were involved in the manufacture of these compacts. First, the top and bottom the silver box itself with its hinge and closure was made in one of 10 or 12 stock shapes. 800 silver was used because pure silver would have been too soft to take the high temperature required to fire the enamel. Next, an engraver decorated the box with ornate floral scrolls, garlands and swags, leaving indented spaces on the front for a central enameled medallion and surrounding patches of decorative enamel. Next an enameller applied the first of the enamel surfaces to these areas and the piece was fired. Since each type of enamel required a different firing temperature this was a step that required some experience and care. In the Bellini family this was done by Ottavina. Next the scene and the imitation lapus lazuli, malachite or turquoise in the spaces surrounding the central scene were painted by one of 10 artisan painters who specialized in this work in Florence. Then these areas were coated with a clear enamel and the piece was fired again. At this point a check was made to insure that the hinge and closure still worked correctly because the metal sometimes warped in the firings. If gilding was to be done, it was completed, but not all were gilded. The top and bottom of the compact were then attached securely. A beveled mirror and powder screen were placed inside and the compact was complete. Swan's down puffs for use with these compacts were purchased separately by the compact buyer.  Giovanni Bellini reports that his family completed 10-15 compacts per week, while Pietro Fallaci reports 30-40. As many as 5 or 6 people worked on each compact and some of the manufacturing steps , like the painting, the mirror making, were "farmed out" to local artisans who, unfortunately, remain nameless today. The final assembly, however, was done at the family's shop.

By the 1970s compacts had lost their allure and tourists no longer wanted these ornate works of art. With a dwindling market, the artisans became too expensive and the production of these compacts stopped. By that time, Fallaci's enamel compacts were selling for $77 wholesale.

Those who collect Italian 800 enamel compacts can see a great variation in the talents of the artisans who painted and engraved them. Some were miniaturists of great distinction capable of rendering fine lines and minute details. Others were little more than cartoonists who repeated scenes without nuance or real talent. Yet these all have a beauty and charm of their own and remain highly sought after today.

Return to the main page

Return to the Bio